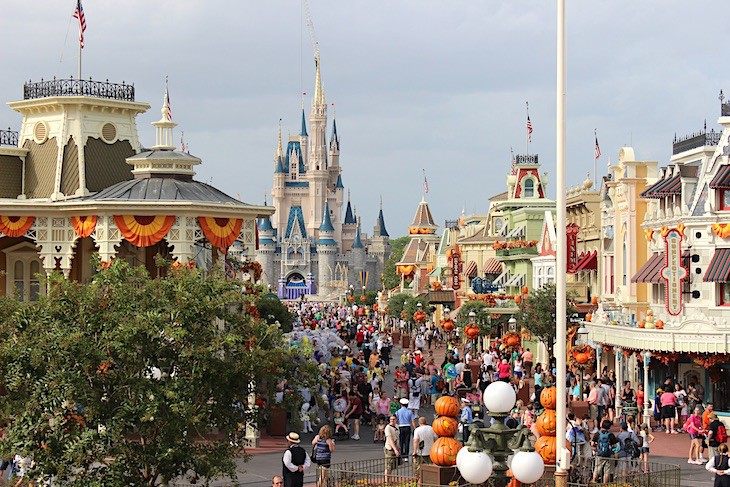 You can’t help but be swept away by the nostalgia of the turn-of-the-century inspired Main Street, U.S.A.®. The streets of this all-American small town (inspired in part by Marceline, Missouri where Walt Disney grew up) are lined with shops and restaurants, a delight to both the young and the young-at-heart. You can travel down Main Street, U.S.A.® by foot, horse-drawn trolley, fire engine, omnibus, jitney, or horseless carriage where you’ll relish the authentic details that appeal to every single one of your senses. From the barbershop quartet singing perfect four-part harmonies and the smell of fresh-baked cookies permeating the air, to the amazing architectural details. And at the end of Main Street, U.S.A. is Cinderella Castle, the icon of Magic Kingdom® Park.

Cara’s Tip: Be sure to allow plenty of time to enjoy Main Street, U.S.A… Too many people rush through this part of the Magic Kingdom Park experience. No matter how many times you visit, you are bound to discover something new and exciting each time!

Hop on a variety of old-time vehicles putting and honking their way down Main Street, U.S.A. to Cinderella Castle. Enjoy horseless carriages, jitneys, and shiny red fire engines or the non-motorized trolleys pulled by handsome Belgian and Percheron draft horses.

Guests will delight in giant floats topped with scores of Disney characters depicting scenes from such classic films as Peter Pan, Sleeping Beauty, and The Little Mermaid, to more modern movies depicting Brave, Frozen, and Tangled. One great highlight is Maleficent appearing as a fire-breathing dragon. Even Anna and Elsa from Frozen appear on the Princess Garden float. Don’t miss it!

Magic Kingdom evenings end with this inspiring show that begins with a dream and includes many animated feature films such as Aladdin, Brave, Frozen, The Hunchback of Notre Dame, The Lion King, Toy Story, and much, much more.

And to top it all off are stupendous special effects featuring lasers, lights, and state-of-the-art projections with more than any other fireworks spectacular in the history of Magic Kingdom park! All this, along with a stirring score featuring popular Disney songs.

It’s a fantastic finale to your day at Magic Kingdom park.

Subscribe to the FREE newsletter and you'll receive a wealth of useful Disney information!

Meet world traveler, Cara Goldsbury, a luxury travel and lifestyle blogger on a relentless quest to see the world in style. She has over 35 years of experience in the travel industry, and, in the course of her many travels within over 50 countries around the world, she has stayed at the most luxurious resorts, dined at the finest restaurants, and has been lavishly entertained. Luxury has been her brand for many years and her honest reviews and desire to share her experiences is what keeps readers returning to her writings over and over again for help in planning their next vacation.